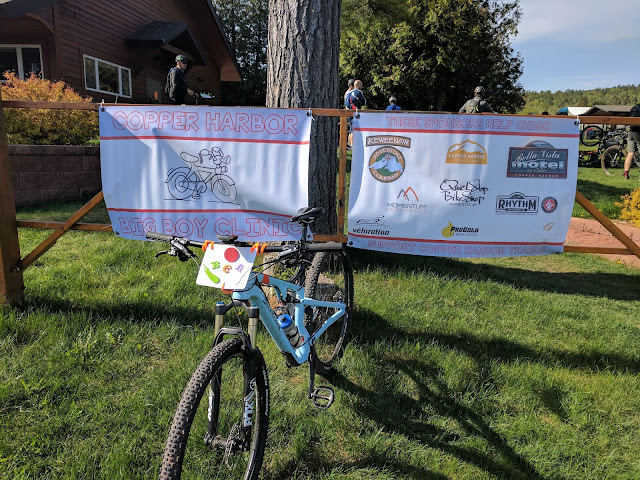 So if you have been around me at all recently you'll know that I've declared this "The Year of the Bike".  I'm still a skier first, but I've got the entire (very long with this weather) off season to dedicate to the bike.  It started with the Fat Bike Birkie, rolled straight into crazy gravel events (Mammoth Gravel, Trans Iowa, and the Royal, each and everyone of those very very wet).  But now it is time to go big on the mountain bike.

Why Do I Want Skills?

I started mountain biking in 2012, so if my engineers math is correct I've been doing it for about 5 years now.  Anyone who has seen me mountain bike will know that my racing is all fitness and zero finesse.  I'm pretty sure I was known as the guy who showed up to the Woolly group rides and crashed and bled EVERY SINGLE TIME.

Fast forward to this past summer.  I'm still trying to fitness my way through mountain biking.  I'm crashing a little less often, but when I do they are more catastrophic.  I tried to break my thumb, cracked my ribs twice, and basically ended my season with a broken collar bone in August.

Further evidence of my lack of bike skills was every time I'd ride with other club members.  We'd hit a corner or a downhill corner and I'd look up and they would be way up the trail.  This was strongly reinforced when Nate and I took our 300 miles of gravel riding together (Mammoth Gravel, Strada Fango, Royal) and went to do Tatanka.  While we had been within 100 yards of each other for that 300 miles of gravel he finished the Tatanka in 10 something hours and it took me 14.  That was about as clear of evidence of the skills gap as you could get.

With roughly 300 miles of ultra endurance mountain bike races scheduled for the rest of the summer, I'd like to try and minimize that skills gap.  I figure I've got an easy 20 to 40 percent improvement without having to do a single interval (don't worry, I will do those too).

When I saw the Copper Harbor Trails Club organizing their men's skills clinic (a recent addition to their highly popular women's clinic) I was all on board.  Three days of intensive skills development on some killer trails in a beautiful location sounded like just the ticket to start the summer of mountain biking.

How The Clinic Went Down 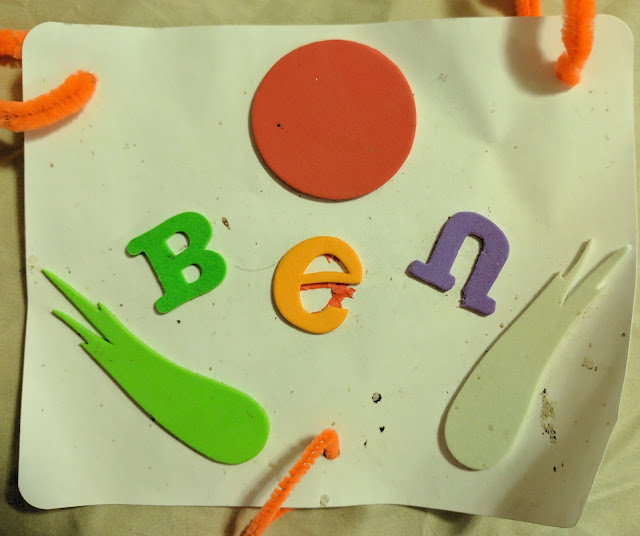 I got assigned to, what I'm guessing, was mostly likely the beginner group.  In addition to myself it included the self professed roadie and a gentlemen who had come to mountain biking much later in life.

Our first morning of skills in the park were all extremely basic body position drills.  Think get your bike up to speed and then ride it in a straight line coasting.  Yup, that basic.  I won't attempt to run you through all of the drills we did, but I'll throw out a bunch of the buzz words I heard a lot.  Bike body separation, attack position, head up, elbows out/around, knees out, low wide and centered, look where you are going, etc.  I heard those terms many many times throughout the weekend. 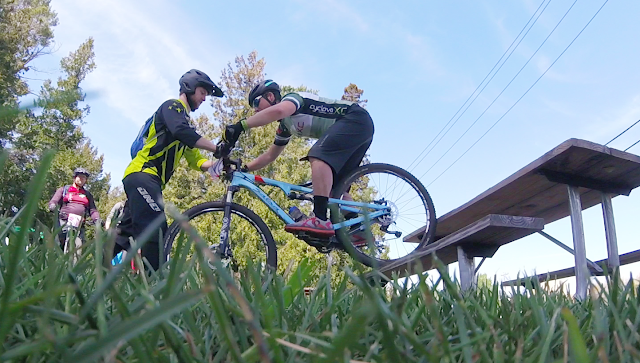 We took our drills to the trails in the afternoon taking the shuttle up and hitting a few trails to try applying the sterile field skills to real trails.  I'll be honest, I wasn't feeling like there was a ton of improvement that first day.  There was no magic "one strange trick to make you an awesome mountain biker".  There were a few corners that felt better, but nothing that was like I was suddenly going to be an elite racer.

The second day was much the same as the first.  Skills in the morning and trails in the afternoon.  We repeated some of the basics, but progressed on to some more intermediate skills including wheel lifts, baby drops, and pumping.  The afternoon found us on more advanced trails (Red Trail) trying to put some more pieces together.  At this point I could feel some actual improvements.  Maybe not surprisingly, if you put together all of the basics (eyes where you want to go, attack position, balanced, elbows out, etc, etc) you can do a fair impression of a real mountain biker.  It was definitely mixed with lots of moments of regression and wondering why I sucked so bad.  Then I would remember one or likely more of the fundamentals I forgot to employ.

The lower half is a different story.  It has some 5' rock drops, some to rock and some to bridges.  Most of my group rode those drops on Saturday afternoon after some coaching.  I however did NOT.  It was enlightening to see it happen, which put the thought in my head that obviously it was possible.  The what if I crash was in my head though and would not let me do it.  I was honestly a little disappointed in myself.

Come Sunday we had the "pick your poison" group session.  I picked the peddally group, otherwise known as the XC racing technical climbing and descending group.  The rest of the groups all shuttled the day.  Not us, we rode UP the hills.  We rode all the way up Red Trail first.  Including the rock drops.  Talk about an eye opener for what is possible on a bike!  I didn't make it, but I learned a few tricks and I think I'll be able to get there.

OK, long story longer, once we reached the top, it was time to go down again.  I hung to the back and told the coach who was running sweep that I didn't ride the drops the day before and I was pretty sure I wasn't going to do it today either.  Well, we got to the first drop and I said, uh, well I said to myself I would try it.  And I didn't crash!  5' rock drop to the 3' bridge and I was stoked!  I rode the rest of the trail hitting the drops and I was beyond happy.  Some of it was just trying to hang with the big XC boys, but it would have been impossible or disastrous without all of the fundamentals of the previous two days.

I of course didn't take any pictures of my own, but Andrea from JRA on Mountain Bike Radio and Brick House Racing had a few on her blog and was gracious enough to let me borrow the following two images.

To close that out we finished our ride by going down Paul's Plunge.  We came into that one blind and from the sounds of it I wanted to scope it out first and then maybe ride it.  The suggestion was that we try riding it blind because in long races you don't always get to preride the course.  Well, I rode it blind.  And then rode it a couple more times because it was fun!

So while the clinic started slow and I didn't magically become and elite mountain biker over the course of the weekend I am extremely happy I went.  Sure I had heard most of what we worked on in various videos on the internet.  But repetition with immediate feedback and an incremental approach under the watchful eye of numerous coaches was far better than fumbling around on my own.

All of the coaches were top notch.  All of the fellow clinic participants were fun to ride with.  The evening events were just as much fun social events as continued learning.  Copper Harbor is still a beautiful place to go hang out.

My primary takeaways were:


I'll say it now, if it works in my schedule, I will definitely be back next year.  From what I gathered roughly half of this years participants were repeat attenders.  While I'm a better mountain biker already, and I have a bunch of foundational items I can work on all summer, I could definitely get my money's worth again.

Last note... as a parting gift, we all got these incredible 12" x 18" prints of us riding over the weekend.